It starts with a map – who doesn’t love a book with a map?! There is a short foreword, almost a dare to continue to read on. And read on I did!

The scene is set. It is depths of winter, in a sea-side hotel – the Hotel Nautilus. We meet Herbert Lemon. Herbert, who was washed up on the shore of (Ch)eerie-on-Sea in a lemon’s box as a baby – and Herbert will tell the story.

Herbie is the Lost and Founder for the Nautilus Hotel. He takes care of all things that are left or lost in the hotel. What? The hotels you have stayed in don’t have a child in the position of Lost and Founder? Then who on earth looks after everything that is lost? Or. returns the lost things to whom they belong?

Herbert lives a quiet, fairly solitary life in his tiny office. He is not looked on favourably by Mr Mollusc, the hotel manager, in fact it would seem Mr Mollusc thinks the hotel would be better serviced if Herbert were replaced by a toothbrush vending machine, or even better, boarded up in is cellar with all his lost things!

Herbert’s peace is shattered as a girl hurls her snowy self through the little window that comes from the street above, begging Herbert to hide her. And the action is begun!

Herbie fails to keep the girl’s terrifying pursuer and Mr Mollusc from searching the crammed basement. However, to Herbert’s surprise and relief she has made her escape. Once he is alone, the girl reappears and Herbert discovers that her name is Violet Parma. Her parents had been guests in the Nautilus twelve years earlier and had abandoned her as a baby, in room 407. They were never seen again.

Violet, has come to Nautilus – and in particular Herbie, to try and discover what had happened them. Hoping there is something left in the Lost and Found that will help explain their disappearance. All Vi knew about the day she was abandoned is that two pairs of shoes neatly tied together were left on the harbour wall and a postcard with a picture of a creature that is half monkey, half fish, was left with her in her cot. She is certain that Herbie can help.

We are introduced to the local fish and chip restaurant owner, who never leaves the pier where his shop is, ever. The beachcomber, Wendy Fossil, who picks up what the sea washes in to sell in her shop and remembers Violet as a baby and even held her once. Most intriguing of all, Jenny Hanniver the owner of the Book Dispensary where the monkey/fish resides.’ A library will lend you the book you want. A bookshop will sell you a book at a price. In this place, however, the book chooses you.’ Favourite line in the book!

Here, in a lovely mysterious way, the story starts to come together. The Malamander and its involvement with Violet’s parent’s disappearance starts to become apparent. 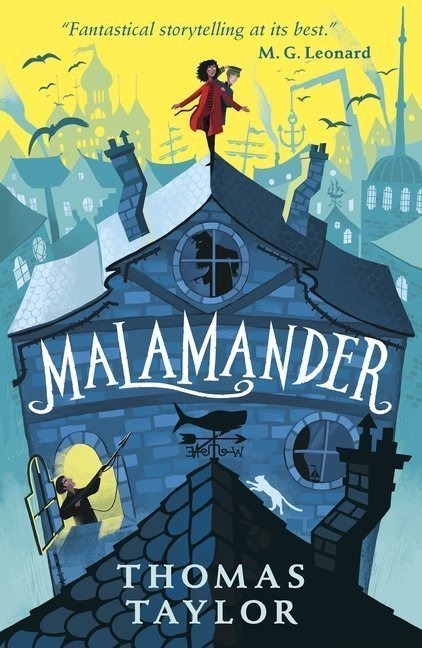 I really enjoyed this book. It was action packed from the get go. You felt like you knew the characters without lengthy descriptions – this is probably because the characters are a bit stereotypical but given it’s target audience, that is completely acceptable. I really liked the setting of a sea-side town in the throes of winter, it seemed to me to be written by someone who knows and loves the coast. Some secrets of the plot took a little while to unravel which gave a lovely sense of suspense at the same time it didn’t become to complicated, so a child would be able to keep a hold on the plot and characters.

It had flavours of Cogheart, for me, a little bit gothic. Some gently comic touches worked well too. The ending was such that we can expect more from Herbie and Violet, I am glad to say!

I will definitely be recommending this one!

Thank you Les from Tells Tales Bookshop for your review!

You can find some excellent teaching and learning resources to use with this brilliant book here:

END_OF_DOCUMENT_TOKEN_TO_BE_REPLACED

The Baby that Roared Teaching Notes