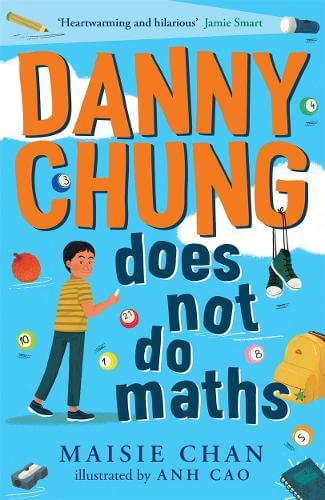 This was a book I was eagerly anticipating arriving, having pre-ordered it due to the reviews I had seen on Twitter. I was beyond excited to receive a proof copy and devoured it straightaway.

Danny Chung is eleven years old and loves to draw. He finds maths difficult but has the obstacle of overcoming the stereotype attached to Chinese people being naturally good mathematicians. Danny draws characters and comic strips to express how he feels and he shares in them things he cannot talk to his parents about, including his opinion on some of their friends.

Danny has a best friend, Ravi, who values Danny’s artwork and works together with him to complete the comic strips. I really like the character of Ravi and the relationship he and Danny share. It feels authentic and I like the fact that they are drawn together because of the way they are treated by other children at school. They face some challenges together and I feel these are relatable for children; I certainly know I have dealt with similar things as a teacher.

Danny lives with his Ma (mum) and Ba (dad), who own a takeaway; Lucky Dragon. Danny hasn’t met any of his other family members until Nai Nai (grandma) comes to stay. Nai Nai has come all the way from China and doesn’t speak or understand English. Nai Nai also speaks a local dialect Chinese, meaning only Ba can communicate with her. A part in the story that stuck with me was when Mr Heathfield, Danny’s teacher, says, “Different? Chinese is Chinese, surely?” It shows us that there are still so many typecast opinions and that we still need to work to break down these generalisations and assumptions people make.

We also meet some of Ma and Ba’s friends, Auntie Yee and Uncle Yee and their daughter, Amelia. In the beginning, I couldn’t warm to Amelia and found that Danny’s opinions of her were just but towards the end, as Danny’s attitudes also change, I found myself feeling sorry for Amelia and felt there was more to explore with her story after Danny’s concluded. Most can relate to the relationship between Ma and Auntie Yee, wanting to impress and trying to ‘keep up with the Joneses’. It reminded me of the relationship between Mrs Tang and the ladies at the mall in Kelly Yang’s, Front Desk – the need for approval and the realisation that no matter what you do it just isn’t enough. I was pleased at the end when Danny took a stand and it was an important breakthrough when Ma supported him, showing how she had grown throughout the story.

The idea that this story has bingo as an integral part is a winner for me! Bingo reminds me of caravan holidays in the summer and wanting to get out to the entertainment complex to play! I really liked the depiction of Enid, a typical, hard-core bingo player and Mrs Cruikshanks, who plays bingo to escape loneliness. I think this is something we overlook but is an important teaching point. I really like how, despite the language barrier, Nai Nai and Mrs Cruikshanks form a friendship and help each other to overcome their own personal challenges.

I was glad that Danny came to realise how important his grandma is, “She was the bravest person I’d ever met. I mean she’d travelled thousands of miles to come be with us, she couldn’t speak the language and didn’t know anyone.” I feel this will resonate with many people and again provides teaching opportunities relating to immigration.

Who is this suitable for?

I would say year 4 and year 5 predominately, though it could work in year 3 as a class reader.

How would I use this in the classroom?

Create a comic strip – take inspiration from Danny and Ravi.

Tell the story of Amelia – what comes next for her?

Create a presentation to show maths is fun or maths in a different context (like in the book).

Mapping (co-ordinations, position & directions) – for Nai Nai when she comes to live in Longdale.

Get your copy here

We are delighted at RR HQ to be part of this special blog tour to celebrate the publication of Escape to the River Sea. We know many Reading Rockers are huge fans of Journey to the River Sea by Eva Ibbotson and as mega fans of Emma Carroll too, Queen of historical...

END_OF_DOCUMENT_TOKEN_TO_BE_REPLACED

Are you ready for a fun, hilarious read full of warmth, giggles and even a whopper panda dump?! Of course you are! So grab yourselves a bamboocino or maybe a chocolate sundae with pizza sprinkles and sit back and enjoy Bad Panda by the fantastic duo that is Swapna and...